HMAS Leeuwin 71
HEALTH ISSUES
Seems some of you sorry lot are in need of medical attention these days... Time to start a health issues page to help with enquiries and all the how to's. Many thanks to all those who will submit articles and tips here in the future... Midge 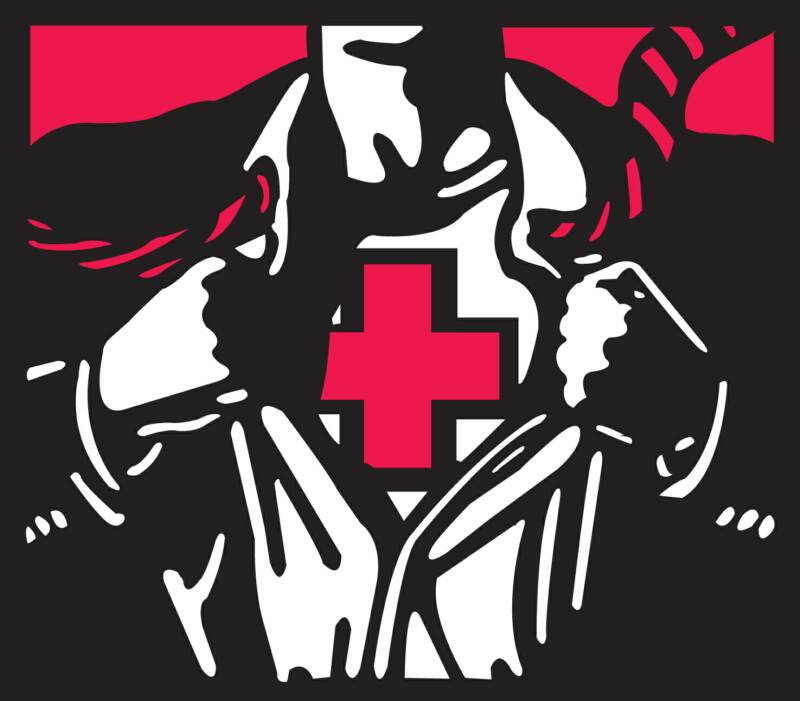 Minister for Veterans' Affairs Mailing List VA013 Tuesday, 30 January 2007
CHOICE OF VISUAL AIDS FOR VETERANS EXPANDED
Veterans requiring prescription sunglasses will now be able to join the growing number of
Australians choosing acrylic photochromic, or transition lenses, after a decision by the
Repatriation Commission to expand the range of visual aids available to eligible veterans.
Minister for Veterans' Affairs Bruce Billson announced that eligible veterans prescribed
transition lenses will now have the cost covered by the Department of Veterans' Affairs.
"Previously only those veterans requiring lightweight spectacles for protection from sun
glare-usually eye surgery patients with fragile or damaged facial skin-have been able to
access transition lenses through my Department," he said.
"With the cost of transition lenses decreasing, and the technology improving with lighter,
shatter-proof acrylic material, transition lenses are an increasingly effective and viable
treatment option and their prescription can be a valuable prevention measure."
Transition lenses automatically darken as they are exposed to sunlight, and lighten when
no longer exposed, so they can be worn indoor and outdoor.  Like sunglasses, these lenses
reduce glare and protect the eyes against damage by ultraviolet (UV) exposure, which has
been linked to a range of ocular disorders, including cataracts, pterygium, cancer of the
skin around the eye, photokeratitis (sunburn of the cornea) and corneal degenerative changes.
"The cost of treating the results of UV exposure is significant, with my Department
spending more than $20 million annually on ophthalmology procedures.  Veterans are also
increasingly requiring treatment for the combined effects of long-term sun exposure and
deterioration of skin quality," Mr Billson said.
"My Department is constantly reviewing its range of available optical aids to keep pace
with technological advances and provide the highest possible standard of care for veterans."
In determining the Schedule of Prescribable Items, the Repatriation Commission is advised
by the Optical Advisory Group, which is an expert panel comprising representatives of
optometrical and optical dispensing representative bodies, DVA's Optical Adviser and
departmental representatives.
TO: TPI Federation Directors
FM: Blue Ryan
GOOD NEWS
Attached is a letter from Minister Billson concerning a replacement for your current Gold Card when your card expires.
As you are aware we along with the VVF and PVA have been trying for some 7 years to have a Gold Card that is distinctive and more representative of TPI’s.
We raised this issue with Minister Billson at our first meeting, as we had with previous ministers, and he has delivered what we wanted.
This is a very good positive outcome which, as explained in the attached letter, will flow on to the new Access Card when it is introduced.
Could you please ensure your members are made aware of these changes to the Gold Card and the details of the proposed Access Card.
Cheers
Blue Ryan 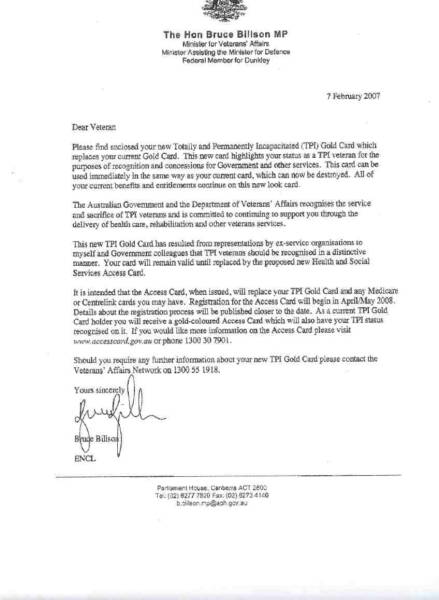 Still procrastinating???
--------------------------------------------------------------------------------
From: Bill and Janet [mailto:[email protected]]
Sent: Thursday, 22 February 2007 3:34 PM
To: Peter Maher
Subject: Re: Quick Newsletter
Hi Peter,
After 2 years of doing nothing and saying to myself "Not Me", I finally got of my backside and went and had the Asbestos Screening Tests,
Being a radar operator I put myself in the low category for exposure.
You can imagine my surprise that the X-rays showed that I had been exposed in two places in the lining of my lungs,
which they called Pleural Plaque.
I have now gone a CAT Scan for further evaluation and hopefully will no the results shortly.
I am sending this to you to highlight the fact that even if you think you have never been exposed directly to asbestos
my recommendation would be:
TO GO AND HAVE THE TEST
Thanks,
Bill
Along with this e-mail, I’ll also send another, that concerns Peter “Lurch” Gover, Lurch was an LEM on the commissioning crew/69 Vietnam trip on BRISBANE, and would be well known to many as he has often attended our Sydney reunions.
The saga highlights an important fact that you should all be aware of – Lurch, although he was entitled, had never got around to establishing his credentials with the Department of Veterans Affairs, and seems to have let our annual reminders slip,  that DVA will meet the costs of treatment for cancer and TB for all ex-servicemen, and they don’t have to prove it was service related.
This, then, is a timely reminder to the procrastinators among you – if you have an entitlement to DVA, as per the relevant Acts, as a veteran, then, get off your backside and do something about it.    Make a trip to one of the Ex-Service Organizations (ESO’s) who will help –VVFA , VVAA,  RSL (Where they have an advocate), or simply contact our own Harry Kirkman (Commissioning crew) –whose contact details are on the “Lurch” e-mail.   Be Warned, though, don’t try to do it yourself, use an advocate/pension officer to help.
Again, let me harp on about the Asbestos Screening, we tell you about this every year too, well, here are the details again:
Defence Health Services and the Defence Asbestos Registration Service database .
Until the 1970's asbestos was commonly used as a building material in many Australian buildings. It was frequently used in ships for lagging, fire retarding and soundproofing until the 1990's.  Because of this common industry practice some Defence buildings and (All?) naval vessels contain asbestos.
If you feel you may have been exposed to asbestos, (if you were a member of the RAN there is no "may have been" involved - you were!), and you want further advice on possible exposure to asbestos, the Department of Defence - in conjunction with Health Services Australia - conducts a free service for assessment, counseling and, if necessary testing. You can access this service by contacting the Health Services Australia office in your region on the following, phone numbers, but you will first need to contact the Defence Call Center on 1800 000 655 and obtain a reference number.   Be advised that the call centre number can be difficult to get on to, so you will need to persevere.
You will need to have the above reference number when you call the Health Services Australia numbers below.
SYDNEY 02 8396 0680
PARRAMATTA 02 9806 7362 /7354
NEWCASTLE 02 4 726 4033
WOLLONGONG 02 4226 0172
MELBOURNE 03 9224 8376
ADELAIDE 08 8468 6084
BRISBANE 07 3307 9422
DARWIN OS 8981 7492
PERTH 08 9324 6444
CANBERRA 02 6269 2022
HOBART 03 6211 0464. 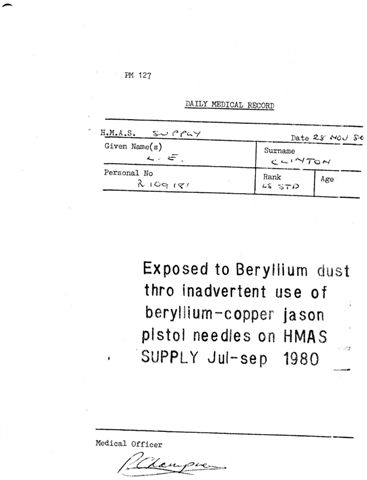 Seems Asbestosis is becoming more prevalent amongst Servicemen who served during the earlier days when it was used in lagging etc... Asbestos.com have asked me to provide links to their information... click the links below for everything you ever needed to know about this insidious disease...
Mesothelioma Cancer                                  Peritoneal Mesothelioma
Mesothelioma Fund
For those needing legal assistance I received the following
Hi Midge,
I noticed that you posted a link to Asbestos.com on your site. My site, MesotheliomaLawyerCenter.org, is similar in that we offer comprehensive asbestos and mesothelioma information, but with an emphasis on the legal options available to asbestos victims and their families.
The legal options available to asbestos victims are of the utmost importance, so that victims and their families can pay for medical expenses and receive compensation for the pain and suffering they endure.
Please consider helping us spread our information by posting a link on your site to MesotheliomaLawyerCenter.org
Susan
Mesothelioma.net